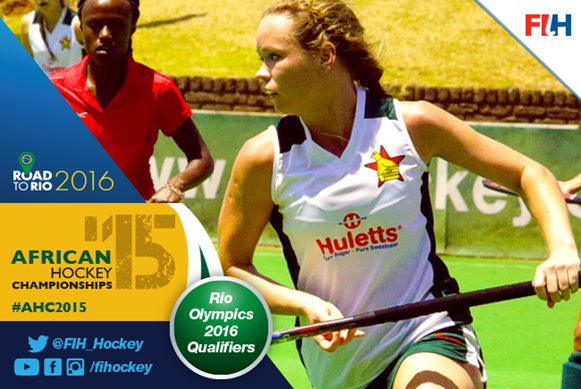 Who is crowned continental champion will come down to the final game of the tournament as both Ghana and South Africa maintained unbeaten records at the women's Greenfields African Hockey Championship being held in Randburg, Johannesburg in South Africa.

The two teams face each other in the final game of the women's round-robin competition, with the winner being crowned African Continental Champions.

Zimbabwe finished their continental campaign with a 2-1 win over Nigeria, which moved them to joint fourth in the table.

It was a close and, at times, tense game between the two teams, but two first half goals for the team ranked 55th in the world was enough to secure the points.

Nigeria pulled one back through Eleho Ovoh in the 39th minute, but the Zimbabwe defence, led by goalkeeper Jordyn Clipstone, held strong for the remainder of the game.

Nothing could separate Kenya and Ghana as both teams went into this match needing to win in order to keep their Rio 2016 hopes alive.

The 3-3 draw has given Ghana a huge advantage as Kenya now need Ghana to lose against South Africa heavily in their final game, and Kenya need to score a lot of goals to overturn the goal difference.

The game was played at a blistering pace and Ghana must have thought it would be their day as Elizabeth Opoku continued to enhance her reputation as a fearsome striker when she scored from open play in the first minute of the game.

After that opening goal however, the game became a thrilling game of cat and mouse, and it was Kenya who scored next, Teresa Nekesa calmly scoring a penalty stroke after a foul in the circle.

Nafisatu Umaru gave Ghana the lead again when she scored from a penalty corner, but that lead was cancelled when, first the captain Tracy Karanja, and then Audrey Omaido scored within a minute of each other to give Kenya the lead.

With just five minutes left on the clock, it was Theresa Mills who proved the hero of the hour for Ghana, slotting home from open play to bring the scores level and keep Ghana’s dreams of Olympic glory alive.

The final game of the day proved to be a one-sided affair, despite heroics from Tanzania’s Sophia Rajabu. Although the ‘keeper made a series of remarkable saves during this match, she was unable to stem the flood of goals as South Africa moved into top gear and top of the table, with just one set of matches to play.

The gap in class, between the 46th ranked team in the world and the team ranked 11th was emphasised as the current continental champions put on a quite breath-taking display of hockey.

The result leaves South Africa two points clear of their final opponents, Ghana, and Lilian du Plessis top of the scoring table with 17 goals to her name.

In the final round-robin games, taking place on Sunday, South Africa face Ghana, with Ghana needing to win in order to secure top spot. With South Africa recording a massive goal tally of 65 goals in five games, Ghana will know that the pressure is on and their defence will need to be on top of their game.

Kenya must beat Nigeria by a heavy scoreline to challenge for second place, while Tanzania will be hoping to record their first points when they take on Namibia.

Keep track of all the action from both the men’s and women’s competitions on social media by using the #AHC2015 hashtag.